Some of my favorite books to read are also some of my oldest. When compared to new releases though, I noticed one key difference: the way the text looked on the page was completely different.

In my older books, the text was crisp, sharp, and indented into the page, which together created a tactile, multi-dimensional reading experience. Conversely, the text on my newer books reminded me of homework assignments printed on my inkjet printer at home; words sat lifelessly on top of the paper, often a bit blurry and lacking definition.

I soon understood that my older books were printed using letterpress, while my newer books must have used a different method...

I was on a mission to find the answer.

So please, join me on this journey through time to learn... "How Letterpress Was Lost"

Considering how revolutionary Gutenberg's printing press was in the 15th century, the process of preparing text for printing (typesetting) actually changed very little over the subsequent 450 years. For nearly half a millennium, individual letters made of metal or wood would need to be individually handset to make the words and the sentences that when placed side-by-side, make a written work. As you can imagine, the process of creating full pages of text one letter at a time was incredibly tedious and labour intensive. As an example, this meant that a daily newspaper could never be more than 8 pages long in the days of handset type.

It wasn't until an American-German engineer, Ottmar Mergenthaler, invented the linotype in the 1880s that this typesetting process was mechanized. With his linotype machine, a "line-of-type" (get it?) would be created by typing letters into a keyboard and then having those metal letters cast 'on the fly' out of a molten metal cauldron.

You can watch a video of this super intricate, behemoth of engineering in action recorded by a role-model of mine, Andrew Steeves at Gaspereau Press in Nova Scotia.

These linotype machines revolutionized the work-flow for letterpress printing, and were thus a mainstay for 60-70 years because they made it possible for a relatively small number of operators to set type for many pages daily.

However, there were a number of drawbacks to these 'hot metal' typecasting machines:

So, what happened next?

Two technologies would be developed that—by the 1960s—would in conjunction ensure the removal of letterpress from its once dominant role.

This technique removed metal type from the equation all together, and instead replaced it with photosensitive film. Just like that, all the heavy metal type and machinery could be put away, and typesetting could be performed in a normal office environment, rather than an industrial workspace.

But how does it work?

All the characters in a particular font would be present on a plate, whose movement would be controlled by a machine, as the user inputted different letters into a keyboard.

Furthermore, by combining lenses with these plates, the size of the font could be updated dynamically, which couldn't be performed on a linotype. Below is an image of one of these plates with the Futura font. 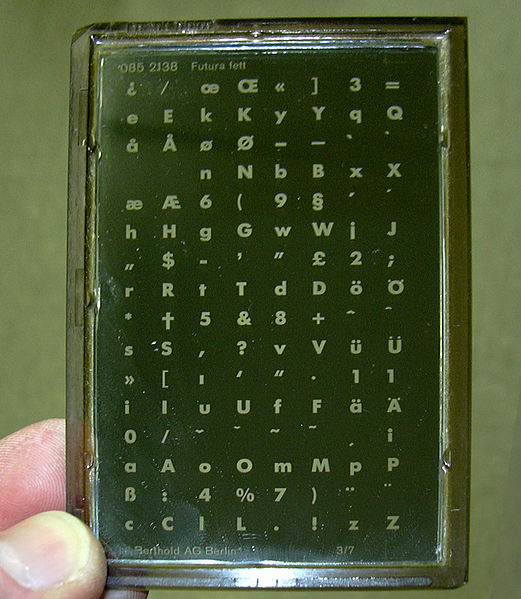 Okay I now I must admit that when I learned about the next step, I couldn't believe how crazy it seemed to a millennial who had been using a word processor since 3rd grade.

Here's what happens next

After all the type has been set onto photosensitive film using the photosetting plate, it is then arranged on a 'light table' in the final size as the page which is to be printed. Please see image below :-) Different sections of text would be rearranged into different layouts using rubber cement or wax adhesive (not just for arts and crafts). Then, the next step (yes it gets better!)

After the film had been organized on the light table with a semi-permanent adhesive, yet another step needed to occur. This layout would be put on an easel and then photographed yet again by an enormous device called a 'stat camera.' The same-size negative from the stat camera was then used to make the template for the printing press that would be used to repeatedly produce the printed text on paper.

And these templates or 'plates' are the segue into our second technological innovation...

Let's synthesize Phototypesetting and Offset Printing: When the film negative from the stat camera is overlaid on top of a blank lithographic plate and exposed to a particular catalyst (e.g. light or chemicals), it results in a printing plate with two surfaces: one that attracts ink (the letters) and one that repels ink (the blank space).

The diagram below explains how these two technologies are used in conjunction for the printing process.

In an offset printer, the lithographic plates for offset printing are first covered with water, then covered with ink. The non-text areas absorb water, so that when an oil-based ink is applied afterwards, the ink is not applied to that area (because water and oil repel each other).

But what does the 'offset' in Offset printing mean?

Unlike letterpress, where the inked plates are directly applied to the printing paper, in offset printing, the inked plate is first transferred to a rubber blanket, and it is that rubber blanket that inks the printed page coming through the impression cylinder. Ergo, the ink is 'offset' or transferred to another surface before it reaches the paper.

So why the monumental switch from letterpress to phototypesetting and offset printing?
So what does this mean about how my books are printed today?
When moving from a letterpress printed book to an offset printed book, you lose one pivotal thing: the 3-D impression of the inked characters into the paper. After all, with offset printing, a rubber 'blanket' is merely transferring the ink alone from one surface to another.
To us, there's something about the crisp, tight impression of letters rendered by letterpress that really brings a book to life as a physical object that (for reasons described above) absolutely cannot be duplicated by an offset printer.